All Sides of the Tracks: The Multiple Meanings of Our Project’s Subtitle

After much debate, our class finally decided on the title of our audiowalk and booklet: “La Pointe: The Other Side of the Tracks.” While the discussions were intense at times (should we use “The City Below the Hill,” or not?), the majority of us agreed that a reference to the train tracks physically dividing Point St. Charles was effective and appropriate.

After being put in charge in the closing weeks of the class to help stimulate a conversation about the title on Basecamp, I was immediately drawn to the railway for inspiration. Ultimately, nothing interesting came out of my brainstorming on the subject (“Passage”? “Ties,” as in railway ties?) Without much success, I abandoned the idea in favor of one suggested to me by Tyson Rosberg. Even though that idea (Pointe a Point) was met with mixed opinions, I am glad that the tracks are highlighted in the final title. Indeed, I believe that the tracks are symbolic of several of the themes presented in our audio and textual narratives, including the community’s larger links to the rest of Montreal and locales beyond its metropolitan borders, and Point St. Charles as a site struggling with internal linguistic divisions. 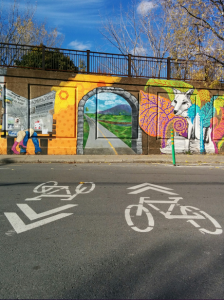 When Richard Stillwell visited our class a few weeks ago, he recounted a story which concretely tied Point St. Charles to the neighboring borough of Saint-Henri via the railroad tracks that ran through his community. Simply, Stillwell remembered walking along the railway on his daily trips to and from school. In this memory, by choosing to emphasize the track as his route marker, he places significance on the line as a linking mechanism to other places.

As suggested in “City Below the Hill,” one of the opening meta-texts in our booklet, the railway was a vital route connecting Point St. Charles to other national and international locations. Much of the literature we have read during the semester relating to the train tracks concerns local industries, such as the Grand Trunk Railway shops, and their large immigrant labor forces. With deindustrialization and the accompanying outward migration of large swaths of Point St. Charles’ population, almost all of these industrial workplaces have closed. However, the tracks as the neighborhood’s symbolic tie to other places remains. (I say symbolic because rail travel is not necessarily the way in which newcomers have arrived in Point St. Charles since the end of the Second World War.)

The Point continues to be an internationalized space which can be seen in the influxes of immigrants from locations as diverse as South Asia, East Asia, the Caribbean, and Africa. Although the era of intensive Irish immigration to the area in search of industrial occupations is over, Point St. Charles still attracts newcomers. As Donna Leduc notes, contrasting her childhood recollections of the community with its present day realities, one cannot walk down Centre Street without noticing an array of signage catering to a variety of ethnic groups who now call the Point home. So, the movement of peoples in the aftermath of deindustrialization is not solely a story of exodus, but also one of arrival, albeit in much smaller numbers.

In our process of constructing the booklet, one issue we kept returning to was how to incorporate the voices or presence of ethnic minorities in our depiction of Point St. Charles, finally deciding on the inclusion of a paragraph on the Sikh temple on Wellington. This religious organization alone cannot speak for the multitude of immigrants living in the Point, nor is it supposed to. However, the Sikh community represented in the booklet does reflect how Point St. Charles is one node in a transnational network, metaphorically arriving via the railway tracks. Thus, in Stillwell’s childhood memories, waves of Irish immigration in the nineteenth century, and the influx of several ethnic groups in the last few decades, we can see the connections that the Point has to local and global spaces, a relationship concretely and abstractly reflected in the presence of the railway line.

Another role that the train tracks serve in our presentation of the Point is that of a dividing line between Anglophones and Francophones. The tracks as a marker of linguistic segregation is a theme which appears often in the oral history interviews collected for the project, and in our own class discussions. Indeed, an early idea in the creation of our audiowalk was the chaotic interplay between both English and French languages as walkers passed beneath the Hibernia section of the tracks. In terms of the situation on the ground, Leduc explains that several community organizations are skewed toward majority Francophone or Anglophone memberships based on their relative position to the tracks (north vs south). One example she notes, Saint Columba House, located on the north side of the line, consists of primarily Anglophone members. However, as we will see, the tracks as an absolute physical separation between Anglophones and Francophones is a narrative device, employed at convenient times to serve the purpose of emphasizing linguistic friction in Point St. Charles. Just as the railway line can be a physical separation between two parts of the Point, it is important to remember that three passageways allow movement between both halves of the neighborhood. Thus, these paths that run underneath the dividing line allow for physical and metaphorical movement from one side to the other, disrupting our sense of separation and friction.

To demonstrate the fluidity of the tracks’ meaning in life story narratives, Leduc, in the same interview, recounts a winter from her youth when Anglophone and Francophone children played together for weeks, each linguistic group picking up new words from the “other.” In this case, linguistic divisions exist in the fact that neither group of children could completely comprehend the other group. However, the example also shows that attempts at cooperation do occur. Further, in another anecdote, she also acknowledges, “So, as I said, you know, traditionally, we have the francophones and the anglophones and…[o]ne of the times where you will see the merging of the two is when [there were] demonstrations or manifestations against any kind of reforms that the government [attempted]…[such as] welfare reform.” Here again, in the same interview, we see the creation and complication of rigidly defined categories like “Anglophones” and “Francophones,” spheres supposedly separated by the railway bisecting the neighborhood. Indeed, in our own project, walkers explore both sides of the tracks by traversing underneath the Hibernia tunnel. Not only do audiowalk participants act out the fluidity of boundaries by travelling through one of the three passages, but also hear and read English and French voices and quotes north and south of the railway, disrupting our notions of division. So, the railway’s community symbolism as a barrier between English and French speakers is undermined by the movement of people and ideas through its passageways.

Thus, with the train tracks referenced in the title of our audiowalk and booklet, it points to several themes also present in our project. Firstly, the tracks serve as a connection (both physical and metaphysical) that bring people and capital to and from Point St. Charles, linking the community to local and global histories. Secondly, as an internal barrier that separates the two physical halves of the Point, the railway line can both reinforce divisions between linguistic groups and offer the possibility of subverting that separation. In this way, the subtitle, “The Other Side of the Tracks,” reflects the points of departure and arrival inherent in Point St. Charles’ place in a wider world, as well as suggests that the idea that the tracks separate the community into two linguistic spheres is discursively constructed.