Audio-walks and the Art of Time Traveling

Prior to this class, I had never gone on an audio-walk tour before. As a public history student, this is a somewhat blasphemous statement to make (it’s almost as absurd as saying that you grew up in Montreal and never watched a Habs game). I don’t know why but I had always envisioned audio-walks as being the outside equivalent to walking around with one of those mp3 players that are offered at museums, in which a middle aged woman with a monotone voice lectures you for thirty seconds every time you enter the number of an exhibit. In was only when our class did the Lachine Canal audio-walk in September that I realized the true value of audio-walks.

In my personal opinion, out of all the ways history can be conveyed to the public (whether it be via museum exhibits, walking tours, or other forms of media), audio-walks offer the most complete representation of the past since they allow you see exhibits through various lenses, your own, that of narrator, and, most importantly, through the voices and soundscapes of the past. Furthermore, they invite you to experience the disjunction between the past and present firsthand since they simultaneously expose you to traces of the past (i.e. the physical spaces you are exploring, the memories of interviewees, and soundscapes) and the present as you get to directly experience how these neighbourhoods have changed overtime. 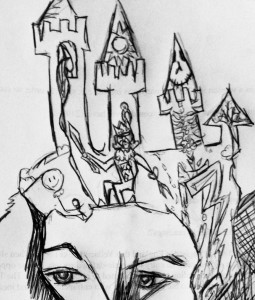 In the past I’ve worked as a tour guide for a museum that offered outside walking tours of various areas of Montreal. During these tours I’d be in charge of leading groups of people around the lower plateau and explaining to them the former vibrant Jewish history of the area. Although these tours were interactive in that they allowed visitors to directly engage with past through visual stimuli and, at times, the first hand accounts of people who are mentioned within the tour (these were often re-iterated through me or presented to them as a text in which they could read if they chose to do so), these tours were not as enthralling as an audio-walk since they only expose listeners to various shades of the past, whereas audio-walks directly position listeners within the past. In audio-walks, the voice clips and the soundscapes that listeners hear allow them to disconnect from time to time from the present and to immerse themselves directly in the past, this allows listeners to reconstruct their own interpretations of past and watch them directly play out before their eyes. Audio-walks have an almost cinematic effect to them. They allow listeners to be active and passive in their reconstruction of the past since they present the listener as both the audience and the director of the story being conveyed. Listeners are the directors of these stories since they decide how to approach and interpret them. The beauty of audio-walks is that listeners have a large degree of interpretative freedom from which they can use their imagination to reconstruct the past, furthermore they are also presented with an opportunity to explore the past more directly since they are physically situated within the area they are being exposed to. Unlike in walking tours, listeners have a degree of autonomy in how they structure the course of the walk (for example they might pause the recording for a moment and decide to physically engage with their surroundings or decide to spend more time at one site than another); furthermore, they are also presented with the impromptu opportunity to explore and engage in the neighbourhood they just learned about after the walk.

When our class launched the beta-version of our walk, it was surreal. It was surreal in the sense that, even though we had spent all semester listening to the stories of interviewees and exploring the Point (both through researching it and through physically walking through the neighbourhood), I felt like I was learning about the history of the Point for the first time. The streets and parks that I had walked by various times and even researched this semester came to life against the backdrop of the voices of the interviewees reshaped my understanding of the neighbourhood and its residents. Childhood memories and stories of resistance and community activism brought life to the cold and, at the time of the walk, deserted streets. One of my favourite moments during the walk was when we approached the YMCA. As you leave the park and walk towards the YMCA you hear children singing “we are the champions,” and even though there may be no children in the park nor in front of the YMCA when you are doing the walk you are able to picture them there. The soundscape sets the scene for when you do arrive at the YMCA and hear the stories about Leo’s Boys and the Girl’s and Boys’ Club in the Point. I wanted to mention the YMCA since it was one of the sites that I had researched and wrote the booklet entry for, yet when I heard the audio-clips from the Y I was in awe, it was like I was learning about the YMCA for the first time. Oral histories are not only important since they bring the past to life, but they also humanize the past in ways that second hand accounts of the past (i.e. written history or even tour guide’s renditions of personal accounts) cannot. It is this humanization of history that makes audio-walks such a unique medium for learning about the past. Through the use of soundscapes and the memories and anecdotes of interviewees we are able to ‘time-travel’ and relive the past while seeing it play out against the back-drop of the present.