Audiowalks and the Visual Turn: Capturing the Twists and Turns of “Our” Point Saint-Charles

“Photographers deal in things which are continually vanishing and when they have vanished there is no contrivance on earth which can make them come back again.”

“Places as depicted on maps [or, in our case, audiowalks] are places caught in a moment; they are slices through time.”

“We also believe that collaboration need not end when the audio or video recorder is turned off, but that it is an ongoing process of dialogue and sharing.”

When we did the Canal audiowalk during the first week of our seminar, I could not help but notice the ways in which my experience was similar to and different from the last time I walked it almost one year ago. As we stood on Charlevoix Bridge listening to the stories former Canal residents recalling “la tour du pont,” the popular pastime of riding the bridge as it rotated to allow ships to pass through the junction, the feeling of the metal structure shifting and clanging as present day cars travelled back and forth between Saint-Henri and Point Saint-Charles was familiar; it was a sensation that stood out the first time I did the walk. Continuing on in the walk, just before we crossed the street to descend a hilly path hidden amongst the trees, I was struck by the progress of the condo construction site located on a nearby corner.

Just a year ago, the future dwelling was a mere skeleton, bits of concrete and rebar jutting out into empty space. Passing by this year, it had put on some meat and skin; walls had been built and individuals units were taking shape. At the time, I thought it was intriguing, but not much more thought went into the obvious change that had occurred in the last year. A few stops in the audiowalk later, while stumbling through Mikayla’s frame as she was taking a picture of an industrial façade, I realized that many walkers this year, and last, were taking photos along the way, documenting their own experiences of the Canal and its surrounding areas, seemingly without instruction to do so.

With this voluntarism in mind, after we finished the Canal walk, I suggested that voluntary photography could be one way to extend the life of our Point Saint-Charles project beyond our carefully marked path in two ways. First, just as we as a class are presenting a particular vision of Point Saint-Charles based on questions engaging with who we are speaking for and what we are saying about them, professional and amateur photographers too subjectively (re)create a version of reality through their the pictures they take. What photographers present in the frame is arguably as important as what is left out. So, when participants snap some photos as they walk through the neighborhood, multiple interpretations of Point Saint-Charles may emerge. The ideas present in these pictures may align or conflict with the portrayal we are choosing to share, which I think is exciting to consider. For example, Professor High’s picture of an African-Canadian woman’s face painted white by a vandal complicates parts of our overall narrative which suggests community cohesion. In this way, individuals are welcome to contest our project’s statements about the Point, just as we critically assess our interviewees’ life stories and the notion of community.

The second, and most straightforward, benefit of having walkers document their experiences of our walk is to chart the changing urban landscape of Point Saint-Charles, a key theme of our audiowalk. Possible subjects can range from storefronts on Centre street that reflect shifts in the demographics of the Point, something mentioned by my interviewee, Donna Leduc, to the blank newspaper section of the mural where people are invited to post flyers about demonstrations and social welfare programs. Of course, other potential photos can center on recently opened and closed down businesses, as well as processes of gentrification. Through this proposed process of visual documentation, our project can extend into the future, showing Point Saint-Charles as a place undergoing continuous change.

Now, we must consider how injecting photography into the afterlife of our audiowalk will work, practically speaking. As mentioned by Professor High last week during the booklet team’s meeting, there is the possibility of setting up a website in the future that is connected to our project. I imagine this would be similar to how the Postindustrial Montreal website serves as a companion to the Canal walk. If this indeed becomes a reality, perhaps the person in charge of maintaining and updating the Point Saint-Charles website will be able to upload walkers’ photos, organizing them based on location. Theoretically, for example, five years from now, we can visit the site and look at pictures of Centre street as it has been documented by participants. As mentioned earlier, maybe we will see new businesses replacing old ones, or, conversely, the survival of certain storefronts. With the fear that Carrefour d’Education Populaire may be at the end of its life, perhaps these photos will document both the remainder of its time in the neighborhood, as well as what, if anything, replaces it.

Another facet of this proposed activity that must be considered is: do we ask walkers before they begin their route to take photographs throughout their journey? There is at least one implication for doing so. The participant may merely reproduce images based on what is gleaned from the narrative of our walk. In other words, if walkers assume that our project is the definitive history of the area, even if we emphasize throughout the walk and booklet that this is not the case and that there are actually a plurality of understandings of “the Point,” then photographers may think that we as project creators are seeking snapshots of the sites we have chosen to highlight. By telling people in advance of the walk of our interest in their visual documentation, much like asking a leading question in an interview setting, we risk unintentionally insisting them to validate our narrative conclusions. So, one possibility could be to not mention photography at all until the end of the walk. Then, ideally, those who wish to take pictures will do so voluntarily, based more so on their own eyes and interests. Of course, our audio and textual selves will still be present, but perhaps this way, the individual walker will have an opportunity to diverge or intersect with our narrative at points of their own choosing.

Finally, there are a number of ethical concerns that must be considered with this proposed side-project, two of which I will mention. First, there is the issue of our walkers engaging in smokestack nostalgia or ruin porn. With poverty and urban change at the heart of our project, along with hope and community activism, will our website be filled with snapshots of decay and destitution, standing alone without context? Also, in line with an eternal debate among street photographers, what right do individuals have to take pictures of people they do not know or places that do not necessarily belong to them? There are no definitive answers to these questions, but they are ones that must be discussed should this photography initiative actually take shape.

As Professor High explains in the third opening quote of this essay, collaboration in oral history should, ideally, extend beyond the setting of the interview. In this way, the authority of the researcher is de-centered by bringing in the voices of participants in the development of the final product. Adapting this sense of cooperation for our project by bringing our audiowalk into conversation with walkers’ voluntary photography, our authoritative voice is reinforced and contested, bringing us closer to portraying the plurality of meanings of Point Saint-Charles and its individuals we have been struggling to present. 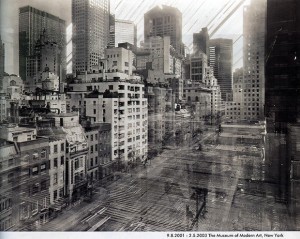