Impressions of Point Saint Charles from the Inside and Out 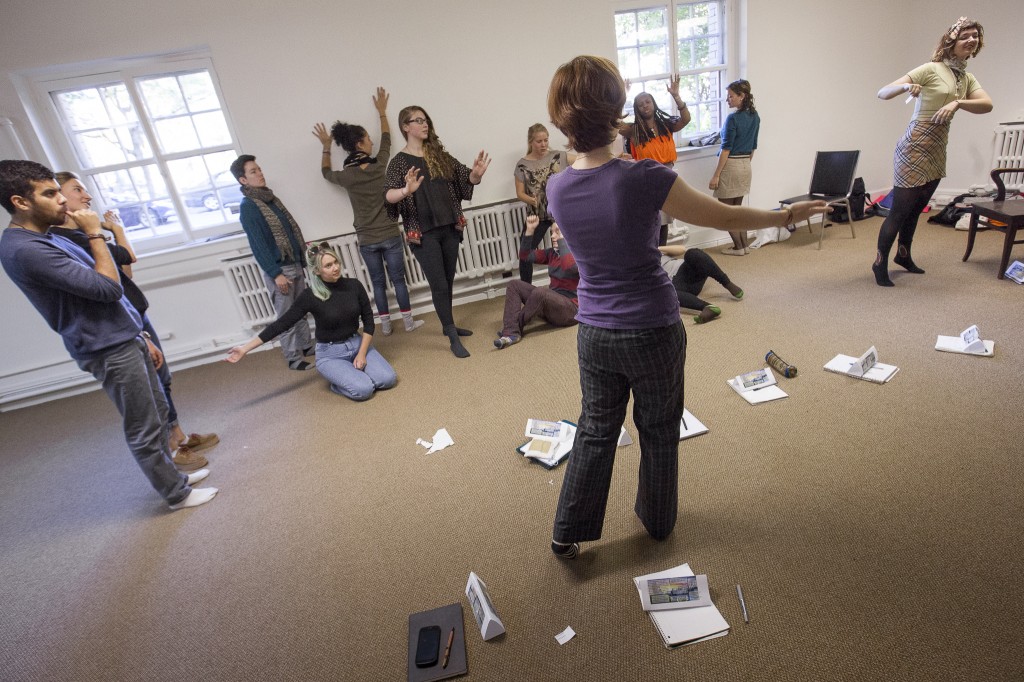 For the second part of my project I chose my favorite phrases or images from that collection of quotes and distributed them, one to each of my classmates. I then asked them to create a movement or gesture and sound inspired by that phrase. This movement need not be overly literal, it should just be a physical emotional response to the phrase you received. I then asked my classmates to go up against the wall and using their movements and sounds; we created an Image Theatre Mural of Pointe St-Charles.

I expected to see fences, the hard metal kind that guards the heart of a community. Instead, I was greeted by painted walls, portraits of redemption, splashes of color and patches of soul. – Annie

Museums provide the past a chance to hold on, as shipwrecked traveller struggles with a life raft. The silent house stands as a statue for those who don’t belong. Her gates are partially opened, a supposed sign of goodwill to travellers and curiousity alike. She stands still, strong, stoic, but with an air of familiarity-as if you had seen her at another museum before. Juxtaposed against the ‘fool’ graffitis, she offers a sort of hesitant trust, as if there were a ball of light at the end of the tunnel that could provide peace or destruction. The only way to be certain is to touch. So I do. Entering the gates, I see her perimeters filled with plaques of historical rememberances, recalling a flock of a community that is nowhere to be found. For indeed, the grounds are empty apart from my footsteps-which may be soft, but to my ears ring like a bell meant to warn soldiers against intruders. I approach the house. Where are the lost sheep? In the midst of the intense beauty of this location, the strong sun only casts shadows of trees. I venture in closer. The house stands alone basked in sunlight and silence; as a stray cat lays on the outskirts of another’s home awaiting comfort. Awaiting a person to rediscover her, bring laughter to the grounds and warmth to her soul. I read the plaques-they tell tales of women pioneers who cultivated this land in search of secular communities. These women erected houses and welcomed all. These women acted as Mother Theresas, opening the gates to their large house that now houses only silent memories. They built, and sweat, and foraged, and were brave. Oh, wait. The silence is not for always. Behind her, there are tracks indicative of the CN Railways. It makes sense. Train tracks disconnect the bourough like a tree branch, suspending from its base, after a sudden and sharp lightning strike. The leaves of this community may be scattered, unsure of how to get back to the branches. They struggle like a fish swimming upstream, trying to find its home, but losing its path. But the path, the tracks, meet here. At a house of welcoming. Perhaps it is from the past, it is too far lost, but the warmth that exudes from its very core tells me that all hope of marrying the past and present is not gone. This bourough is filled to the brim with beauty-beauty in juxtaposition of historical and modern, in the strength of a community struggling to break the silence that is often accompanied with imposed change, in the art and nature that surrounds architectural gold. – Kayla

It was that image of an old queen, her clothes are beautiful but old, used, and she was welcoming all those stranger, being by herself a whole Salvation Army. – Aurelie

The mixed composition of the neighborhood, both it’s young and older sides, the sharing aspect, the help people provide to each other, made me think of an old man sitting in a wheel chair, being pushed by a little girl. I am still confused about this image and is wondering if the comparison is offensive to the people. – Clarisse

So many big, undisturbed spider webs in Point St Charles. Spider webs are fascinating, so that is where I took my inspiration from. To me, Point St Charles is like a blue spider web, that fades from light blue to dark blue. The blue representing the working class community that lives there, and also the Lachine Canal. The fade from light to dark is representative of the passage of time and how the community has strong ties between past, present and future. The are proud of their heritage, they are are present in their own realities, and they look to how they can better their realities in the future. Spider webs are also very strong, and very resistant. They also hold the symbolism of creation and recreation, which Point St Charles has seen in its time. The neighborhood adapting itself to the changes happening within it. Be that issues of gentrification and factories turning into condos, or need for more community outreach and the creation of Share the Warmth. – Brittany

I see community as a big warm stew– stirring and swirling around. In the stew there are all sorts of vegetables – the meats the greens – all cooking , some underdone, some well done. Different walks of life. All the chunks are crucial. Different smells and tastes and textures . Cooking into something, not yet known – Madeleine

A place to ride my bike

A place to walk my dog

Where my family lives

Lots of art; murals, sculptures in the park