I am an individual of what would be best described as coming from a rural working class/blue collar background. Most of my childhood was spent on a former cold war era army base converted to housing that by the 1990’s had become an economic burden to both the municipal and provincial governments: was then abandoned and became a ghost town and a few years later demolished and razed to the ground.

As an adult I lived in urban neighbourhoods that eventually became gentrified and displaced many residents no longer able to afford the dramatic rent increases that occur – myself being one of them. I am familiar with places that change from within the community but also neighbourhoods that change due to outside causes. My interest was to find a place that represented the idea of insider and the outsider and to somehow personally negotiate their conflicting ideas of community and of their “right to the city.” 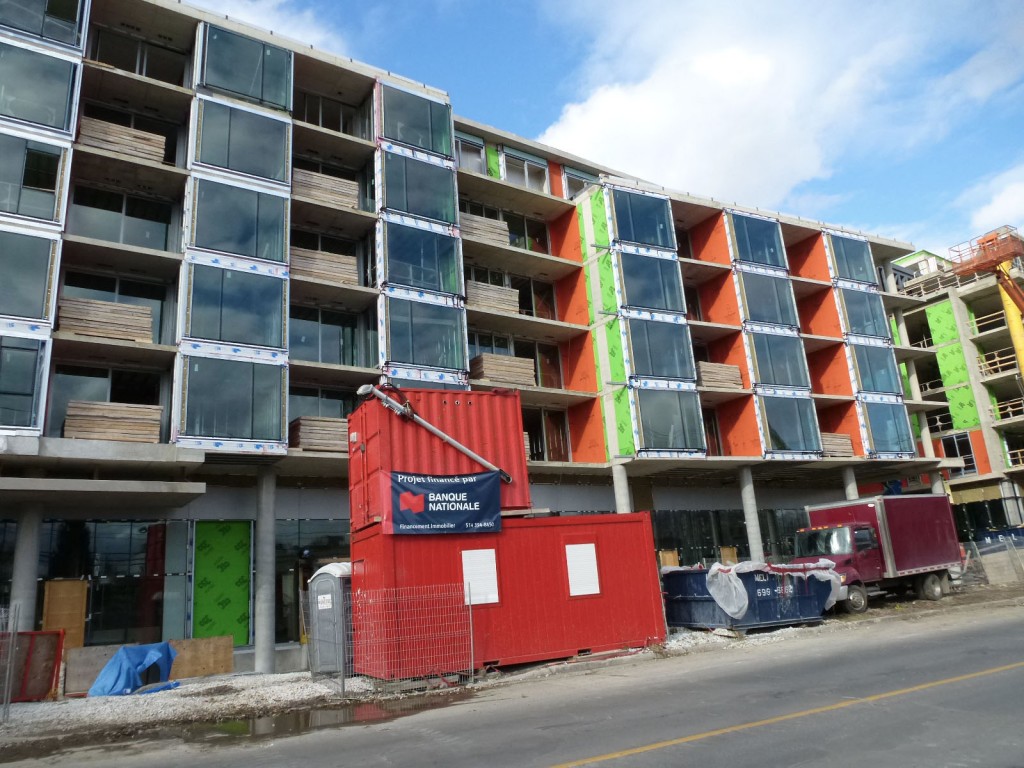 The site I chose for historical research and as the site of materials for the intervention project was the Myst condominium development located at 2365 rue St- Patrick. This site, amongst others along the Lachine Canal is a contentious site of accelerated and dramatic change and of displacement, where “…Zones of affluence have likewise emerged with gentrification.”   Andrés Escobar of Andrés Escobar & Associates, the chief designer of the Myst condominium project describes Myst’s design:  “The style is the opposite of what you would expect in the canal district.  No red brick, no dark beams – nothing heavy. Myst is sleek and sexy.”   The history of the site and of the industrial and social history of the Point – the character of the neighbourhood becomes displaced/erased by sleek and sexy design and by the economic forces of gentrification, seen as an external force.  An interloper.

Consumers Cordage, which was established in 1856, occupied the original site of 2365 rue St- Patrick where the Myst condominium development is being built.  Consumers Cordage manufactured twine, cords and gypsum for domestic, industrial and marine use. “An immense covered shed, or rope walk, extended towards the aptly named Ropery Street and the Charlevoix Bridge. It was used for twisting long fibres into ropes”.  Consumers Cordage was later owned by Alexander Webb Morris (1856 – March 30, 1935). He was the director of the Molson Bank and was associated with Bank of Montreal. He was also mayor of Saint-Gabriel – then the west side of Point Saint Charles from 1885 to 1887 and became an independent member of the Legislative Assembly of Quebec from 1892 to 1896.  The ties between money, politics and industry and their impact on the community of Point Saint Charles is part of the history of the site, as it is today.

According to insurance maps, much of the lumberyard and rope walk and other buildings were dismantled and part of the site housed the Overseas Chemical Co Ltd from the 1940s until the early 1980’s.   In 1992-93 a new building was erected at ST Patrick and Ropery for Carpet Art Deco, a company that manufactured and sold both industrial and high-end residential carpeting and rugs. Carpet Art Deco moved its operations to LaSalle in 2011, company president Fadi Melki decided to tear down the building and develop the site as the Myst condominiums development.

My intervention was a modest and personal gesture to appropriate and distribute site rubble fragments from a condominium development that is currently reshaping Point Saint Charles. The Myst luxury condominium building offers no housing for local residents; it is for people who have no connection economically or culturally to Point Saint Charles.  I collected pieces rubble form the site as it was being constructed, took them home and washed them. I then drew a symbol on each piece of construction rubble and gave them as  “gifts” to the other members of The Right to the City – Industrialization and the Built Environment class.

I then asked my classmates to place their gifted fragments to places in the Point that held resonant meaning for them through their research and discovery of Point Saint Charles. Someone who finds it could then take the gifted rubble and keep it or place it somewhere else. It may be cleared away, returned to landfill, even thrown away but still would have lived “temporarily ” in the Point.  Each person “gifted” was told that the condition of the gift was to photograph where they placed it and why.  Their photos and responses would then be posted on an Internet site that I made and would be linked to one another, for anyone to discover on the Internet.  Through the materials of change we would be able to temporarily mark a spot in the point that we had discovered as something more than a mere place of academic (outside) study but also generated a feeling of attachment – of feeling (inside).

Each piece of site rubble was inscribed with an “X” in graphite.  I chose the symbol of the “X” over other symbols as it is a symbol that erases –crosses out – but also is a symbol that’s marks where one or something is: X marks the spot.  This is an affirmative mark, a mark of insistence that you/I/we belong in this spot.  The “X” drawn in graphite was chosen over my original intent to engrave the rubble, the process was too costly and it destroyed the concrete fragment.  Engraved stone seemed too much like a cemetery headstone, which I felt did not reflect the vibrant and rich history and present of the Point. Graphite is a form of carbon, which is present in all life forms on earth.  It is also the basis of most of the materials and industrial processes that build the world we know and live in.  I wanted to link the materials of the urban environment with the bodies that live in it, bodies that form a community, and through my intervention, acknowledge a community that has, and still is insisting on it’s right to the city. 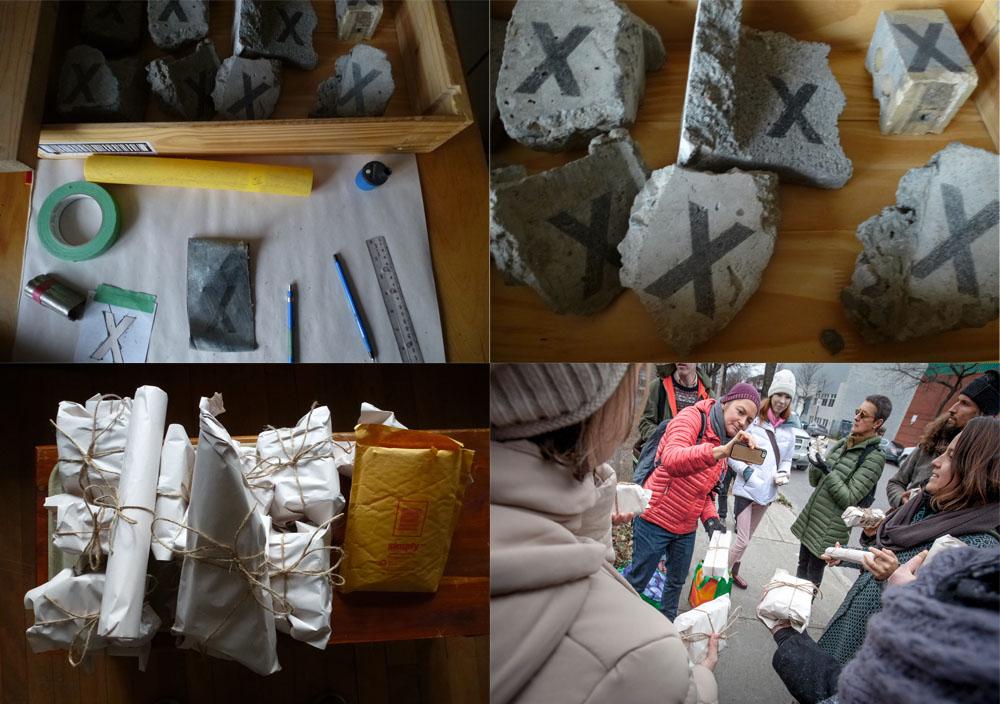 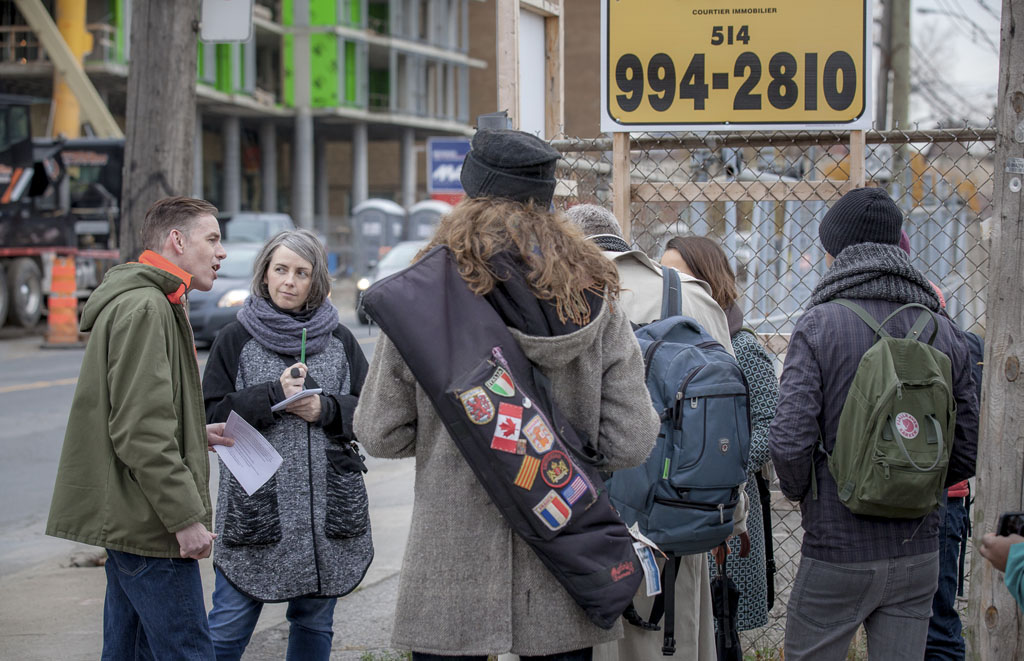