A Loss in Three Movements

My intervention, titled A Loss in Three Movements, was informed by the ways in which the loss of people in our lives helps shape our experience of space, both geographical and metaphorical.

The intervention was structured as part walk, part oral history, with the point of departure being Kościoł Świętej Trójcy, or Holy Trinity Church on rue Centre in Point-St-Charles. The church, built in 1933, houses the parish that my grandfather, Frank Malcharek, was born into in 1927. The parish itself was initially housed in the St-Charles School, which would have been located at the corner of rue Augustin-Cantin (known at the time as rue Manufacturers) and rue Island. The parish transferred to the basement of Église St-Charles in 1920 and this is where my grandfather would have been christened. However, because of the strong connection I felt to the Holy Trinity Church, I decided to start the walk there. It would have been the church that my grandfather grew up in, where he had his first communion, and where he would have had the funerals for his parents. 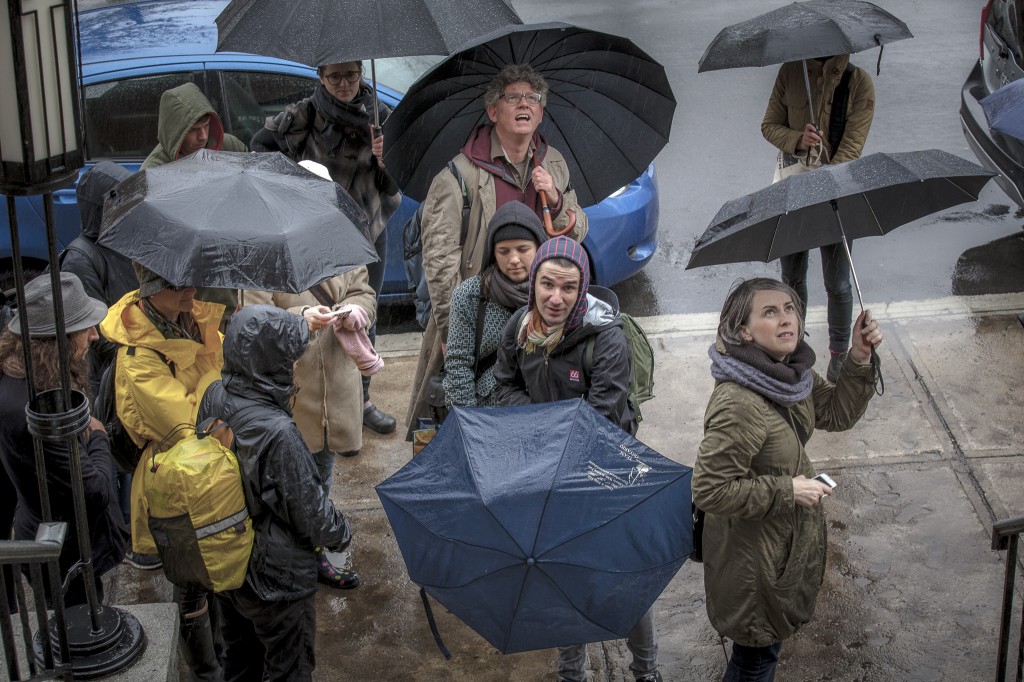 The first part of my intervention involved collecting family history and materials that I could use to illustrate our history within the context of the intervention. This involved me harassing my mother on numerous occasions, begging for photographs, asking tonnes of questions, and generally making a pest of myself. Given that I got my stubborn determination from her, she happily obliged. During this process I made the connection between the railroad that splits the Point in two to my father’s family. I had been wary of delving into that history given my very tenuous relationship with them, but upon learning that my mother had some family effects that could be used in the intervention I decided to include them. My (paternal) grandfather, Carmen Glenn, was a CN railway engineer from 1943 to 1980, and would have worked out of the CN Rail Yards in the Point. He had the privilege to drive the last steam-operated locomotive for CN before it was put into retirement. When he finally retired in 1980, he drove a Via Rail passenger train across the country, with a large banner hung across the front of the locomotive. When my father died, it came into my brother’s possession, and after a bit of begging and pleading my mother sent it by courier to me.

In the days before the intervention, among the anxious fervor in which I found myself existing, I decided to create an archive that I would bring with me on the walk. I have had a fascination with archives for a number of years and had the privilege of doing research work in the McCord Museum’s archive over the summer, so it was a fitting decision on my part.

The morning of the intervention the weather was promising. It was cold, but manageable. I had initially thought to bring the banner with me, but given its size and the amount of materials I was hauling to the Point I decided otherwise. I first stopped off at St-Viateur Bagels, which is sort of a pilgrimage spot for my family. After hauling myself down to the Point and getting wet during the first intervention, it was my turn.

The intervention is a bit of a blur at this point. The first thing I did, after a brief activity, was play the song “World Without End” by Laurie Anderson. I wasn’t sure how it would go, but Cynthia’s portable Bluetooth speaker worked perfectly. I almost lost it during the song, but managed to pull myself together for the rest of the intervention.

After sitting and reflecting upon what happened, I think the most important aspect was being able to talk about things in a pre-planned way, but with no specific goal in mind. I prepared cue cards with words and phrases on them, and had them ordered in the way I wanted to talk. But as the rain got worse, I improvised, not using all of them or shifting from one to another depending on how the walk was progressing.

In the end, looking back on it, I think the most powerful part of the experience was actually getting to speak with everyone. I had no idea how it was going to play out, and the final product was far from what I had envisioned in my mind. Standing in the rain at the final spot, I couldn’t help but feel relief. In the end, the three interventions that day flowed so well together and I feel helped to bring us closer as a class. It has been such a privilege to be in a group like this, I can’t say that enough.

Thinking about a title for my intervention after the fact, I decided that A Loss in Three Movements was fitting. Through the three losses I discussed in the context of the intervention, I tried to show the ways in which emotion is very much tied to place, and how the urban environment is imprinted with that relationship between memory and the self. I am not entirely sure I succeeded, but I feel proud of how it went nonetheless.