In many ways, what we are doing by telling the story of Point St. Charles is new to me. Before I moved to Montreal permanently in September, I’d spent a lot of time in the city, but I’d never heard of The Lachine Canal or Pointe St. Charles, and I’d certainly never been there. That all changed at the beginning of September, when I first discovered the Lachine canal and the audiowalk that had been created for it. And I was like, “whooooaaaa, this is all so neeeew, and I have so many things that I thiiiiink about it!”

One of the things that I thought about was not entirely new for me, however, and that was language. Before I get into that, however, I have to tell you a bit about where I come from so that you may better understand my perspective.

I grew up in Nova Scotia, where francophones are few. Because of this, I had little reason to learn or speak French growing up. . . so I didn’t. When I went to university, I discovered that I needed to pass a foreign language credit. As if waking from a dream (where I was, of course, serenaded with corny fiddle music and had access to as much fresh Atlantic salmon as I wished), I suddenly realized that the amount of cereal-box reading I’d done as a child might go a long way in helping me pass a French class. I decided to take a beginner course in la langue de Molière. Though I’m not sure Molière would have been impressed with my early attempts to conjugate ‘être,’ I eventually majored in French, and was employed at a museum where I had to use it frequently. By the time I graduated, I was more-or-less bilingual.

‘More-or-less’ means that I could always communicate what I needed to, but in a lot of ways, my French was a bit rough around the edges. I’m not talking about writing or vocabulary here (though of course those were not insignificant factors in the “more-or-less” qualifier I used a moment ago). More difficult were slang vocabulary and comprehension of accents that I hadn’t been exposed to at school. When you learn to speak a second language primarily in school, it’s hard to move away from that version of the language. At work, I remember freezing more than a few times when a francophone visitor asked me something I didn’t understand. Sometimes I would struggle through, or ask them what they meant, but this was difficult when the lack of comprehension was accent-based. Occasionally, I would have to signal a francophone colleague to come and help me out. Those kinds of situations were embarrassing, to say the least, and I always felt like a bit of a failure for not being able to do my job properly and live up to my workplace bilingual designation – oh yeah, and my French degree.

Last year, I bid farewell to Nova Scotia and moved to the Eastern Townships, to a very francophone, Québécois area. After spending a year there, I was legitimately bilingual. In fact, I was bilingual to the point that if somebody pointed out or inquired, mid-conversation, if I were Anglophone, I would get a trifle annoyed. While nodding and saying, “yeah, yeah, my parents speak English, we spoke English at home” because I knew it was usually meant as a compliment to my French, I would be thinking, “um, ok, I may speak better English than I do French, but I actually belong to a third category seemingly totally unrecognized by this dichotomy of English and French people. Why does there need to be a dichotomy? There is no dichotomy. I don’t have to belong to one category or the other. Bilingual people . . . uh . . . represent!”

Now that I’ve told you that story, let’s get back to the audiowalk. When I listened to the audio-walk of the Lachine Canal, I listened to the English version. The narrator spoke English, but the oral history interviewees spoke whatever language their interview was conducted in. For many of them, that was French. Not only did they speak French, they often spoke a particular heavily accented (I mean, with an accent that fell out of the purview of the Parisian and Parisian-esque accents that I had learn at school) variety of French that I remember, as an erstwhile Anglophone, finding so difficult to understand.

All of a sudden, it was like I reverted to my former dichotomized self. I remember commenting after the walk, “I mean, it wasn’t such a big deal for me, since I’m bilingual, but if an Anglophone from outside of Quebec ever listened to this interview, they wouldn’t understand half of it. Maybe they would feel overwhelmed, and maybe they would turn it off. Even for Anglophones that have a reasonable understanding of French from school, those accents are going to make it difficult for them to understand what’s going on. And that’s a shame, because all the interviewees have a lot of really cool stories to tell, and I wish it were possible for everybody to be able to understand what’s going on in the walk.” All through this diatribe, the hypothetical Anglophone in the story was shockingly similar to me at various different points in my French-learning journey.

Admittedly, my objections were not purely based in the politics of English and French coexistence in Canada – er, I mean my own memories about how unpleasant it is to not understand something when you were really trying to. They were also about a more general idea of accessibility. Having worked for museums for two years, I’d always subscribed to the philosophy that sounding-too-smart-for-your-own-good had no place in the Public History enclaves of the nation. It drove me crazy when academese, language that seemed to deliberately obscure the meaning of what was going on, ended up on museum panels. My reaction against the lack of translation in the Lachine Canal audiowalk at least partly stemmed from this. I was soon to learn, however, that translating spoken word comes with some different issues that translating the writing on museum walls from words ending predominately in “tion” to more universal guttural sounds and pictograms plain English.

When I expressed my feelings about the inaccessibility of the audiowalk to my classmates, I was met with a bit of support, and a few objections. My apologies to those who made these arguments, as I no longer remember who said what. However, the objections I remember were these:

“The accent is part of the historical nature of the neighbourhood. A lot of these particular accents are disappearing these days, and having these samples – even if we can’t understand them – is historically important because it shows us what people sounded like back in the day.”

“If we only use English interviewees in the English version, we’re cutting off a huge part of the population of that area. Our story becomes more one-sided in the name of accessibility.”

“We could do whisper translation, but that sounds kinda weird.”

I’m still not sure what I think about all this. Certainly, the first and second point are true. If we do not include interviewees from diverse populations, we are losing something, representation-wise. I’m still divided, however, about what I think of the third point. Should we use some kind of whisper translation, making sure to leave the volume of the original loud enough so that people could hear the accent? Or would that be too confusing, flying in the face of my original accessibility-based objections?

I have another question. If language and accent are marks of authenticity, an authenticity that we should not change for accessibility’s sake, then what do we do about allophones? In Pointe St. Charles, many of our interviews discuss interactions between older residents and immigrants, but we have few interviews from immigrants themselves. This is odd, considering that the immigrant population is not small. To add to this, none of the interviews we do have with immigrants are in a language other than English or French. In a sense, the argument that French need be left as is without regard for Anglophone listener comprehension (and vice-versa), while accommodating in certain ways, is hypocritical if we consider the position of immigrants in the neighbourhood. If an interview were conducted in a language other than English or French – and it is reasonable to say that for many newer immigrant residents, they would be able to express themselves more fully in their native tongue – would we use it? Unlikely. If we did use it, we would almost certainly translate it. If we didn’t translate it, listeners would almost certainly find it bizarre.

My final conclusion, then, has a lot less to do with accessibility than it does about the politics of language in Canada and our position as Canadians. Canada is an officially bilingual country, so to create something bilingual makes sense to people – ok, maybe some people like me will have some objections about exactly how we negotiate this bilingualism, but I do think that the acknowledgement of the official bilingualism will keep things running more or less smoothly when we make decisions about which languages to include. On the other hand, a trilingual or tetra-lingual audio-walk would almost certainly be met with resistance from an accessibility standpoint. This in spite of the fact that a work that included more languages in the same way that English and French are included could actually convey the modern make-up of Canada (and, more importantly, Pointe St. Charles), better than a policy of English-French bilingualism. If we’re saying that French and English shouldn’t be translated, then we’re acknowledging that it is not only stories that represent the neighbourhood, but other features of oral history like accent and language and vocabulary. So what else represents the neighbourhood? What have we decided is important enough to represent the neighbourhood? Why?

These are big questions, and I don’t have clear-cut answers to them. Perhaps the greatest way I have changed from that initial day in September is that I now recognize more fully that there is no way we can come up with a perfect product that does all the things we wish it would. Even just from a technical standpoint, I may have changed my mind about whisper translation. As it’s not something I know how to do, even if we decide as a team that we want the audio-walk to be as accessible as possible, we only have a few weeks to create it, and we may not have time to organize whisper translation. Yes, I find it bothersome that we are asserting the primacy of accent over the primacy of story, and that we are asserting the primacy of English and French over the primacy of the languages of immigrant populations, and maybe that we’re asserting that accessibility is less important than other aspects in our project.

All this being said, have I come up with a good solution to address these problems? 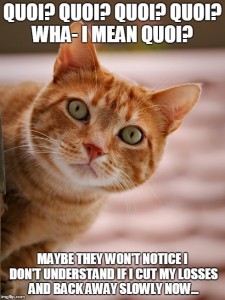