On October 6, 2014 Restaurant et Taverne Magnan announced that it would be closing its doors after 82 years of operation. Opened in 1932 at the corner of St-Patrick and Charlevoix streets in Pointe Saint Charles and owned continuously by the Magnan family, the tavern has been a long-standing local landmark. 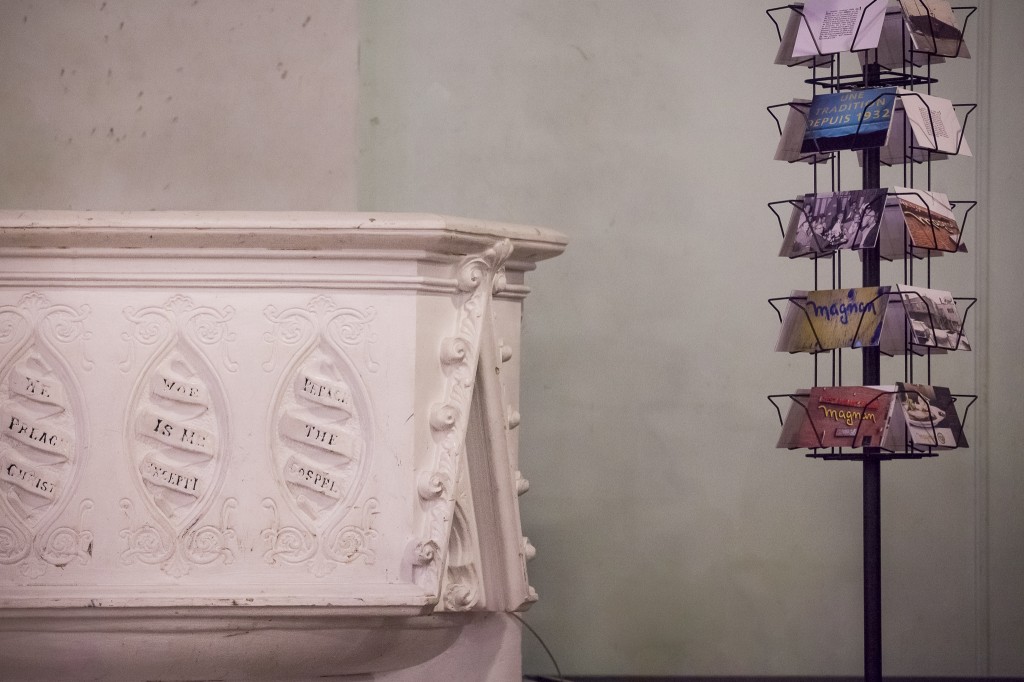 I have always been interested in what makes the neighbourhoods that we live in feel like home, including the public and commercial places that so often serve as sites of community identification and comfort. As a student of neighbourhood change, I am learning about the range of local and global forces that shape and structure urban development and gentrification. But I return, always, to the personal: to the relationships between people and places, and how our emotions and identities can be so tied to the places where we live and spend time. As a student of and visitor to Point Saint Charles, I was interested in designing an intervention that was based around the act of listening. I was curious: How were people feeling about the announcement of Magnan’s closure?  And finally, as an oral historian and archivist, it seemed like an important moment to ask: how would people like Magnan to be remembered? What spaces were opening for people to share their memories?

Over the course of the past month, I have heard and collected a range of personal memories of the tavern, and perspectives about its closure. I had conversations with people at Magnan’s bar, and reached out to a number of people who had posted in response to the news online – I exchanged a series of personal facebook messages with a range of people, in French and English. I recorded an oral history interview with Roger Agnessi, who has lived in the neighbourhood all his life, is fascinated by its history, and was incredibly generous in sharing his expertise. I listened to interviewees talk about the history of taverns in the neighborhood, using the database at the Centre for Oral History and Digital Storytelling. I read through and copied a number of articles and documents held at local archives (Héritage Montréal, and les archives de la ville de Montréal), and transcripts of conversations recorded as part of thesis by Anna Kruzynski, called “Du silence à l’affirmation: Women making history in Point St. Charles”.

Originally, I was interested in hearing about how people were experiencing and interpreting the loss that Magnan’s closing might represent, and collecting memories from the tavern’s long history. I asked people to share their memories, and they did: I heard stories of birthday parties and wintry nights, lobsters and roast beef, women’s sit-ins and visits from politicians, and stories of the four generations of the Magnan family. People lamented the tavern’s closing, and shared their shock at the news. But I also heard stories of anger and betrayal, inclusion and exclusion, comfort and familiarity. I heard about the loss of industry in the area, dramas between neighbourhood families, the changing role of women and the changing role of taverns, and shifting articulations of class, language, and local pride.

What emerged out of my research was a compendium of perspectives and multiple versions: a reminder that every place has an infinite number of tellings. I think of something I read by Rebecca Solnit: “Places are leaky containers,” she writes, and “every place is if not infinite, than practically inexhaustible.”

As we think about the right to the city, it’s a reminder too of the complexity of this concept. In the abstract, it can be an easy task to map power and powerlessness. But at the scale of the neighbourhood, every place is built of co-existing differences, competing notions of what a place is, has been, and should be. As students, researchers, and as actors or “interventionists”, I think it’s our challenge to do work that engages and honors this complexity.

For my project, I collected fragments of the stories that I heard and read about the history, present, and future of Taverne Magnan. I handed a fragment (or two) to each of my classmates, who were seated in one large circle. One-by-one, we read the fragments aloud, together telling a poly-vocal and multiple – yet still, of course, partial – story of the tavern, placing some of the different perspectives that I had heard in conversation with one another.

After our reading, I handed out postcards that I had printed, each with a different image relating to Magnan. One side of each postcard holds a full-bleed image of the contemporary tavern, an article clipping, or a picture from the tavern’s history. On the other side of each postcard, these words are written: “Écrivez une souvenir de la Taverne Magnan. Comment aimeriez-vous que Magnan soit commémorée? Write a memory of Magnan Tavern. How would you like Magnan to be remembered?”

We wrote pieces of the fragments that we had read on the postcards, and placed them on a revolving postcard stand. As part of this ongoing intervention, I will continue to collect stories, memories, and perspectives, to be written on postcards of Magnan. Together, these postcards tell a complex story of a long-standing community institution. On their own, each postcard represents the personal experience of an individual. Each postcard also becomes a souvenir: after December, we can no longer visit the tavern ourselves – we’ll only have the pictures and memories that have been recorded. The project is called “Return to Sender,” which speaks to the very concrete nature of changing addresses, storefronts, and homes in the neighbourhood.

At the exhibition on November 29th, everyone is invited to participate in this project and conversation by sharing a story of their own. If you know Taverne Magnan, you can write a memory on one of the postcards inside. If you don’t know Magnan, you can share a memory about a place that you have known that is no longer there. This project is about Taverne Magnan, but it is also about the relationship between people and place, our personal and collective emotional geographies, and ultimately, the value of personal stories in composing a more complex understanding and representation of the places that we love, and the histories of our neighbourhoods.

A special thank you to Roger Agnessi, for his generous tour of the neighbourhood; to Taverne Magnan; to all of the people who sent me personal messages on facebook (who will remain anonymous); and to Héritage Montréal, les archives de la ville de Montréal, Nathacha Alexandroff at the Société d’histoire de Pointe-Saint-Charles, and Celine at the Centre for Oral History and Digital Storytelling.