For girls and women, to live in our bodies in a male-controlled world is to live in places of continual siege. […] I have not wholly concluded the process of reclaiming all the territory that is my body. The reconquering of territory and the maintenance of territory continues daily. Someday I will fully and unconditionally occupy all of its space at all times. – Si Tranken

Walking through Pointe-St-Charles, I have found that the neighborhood has both charming spots – lush greenery and big trees, homes with stories – and not-as-nice spaces – concrete industrialism and run-down buildings. Through my site visits, I was most drawn to the places that are part of the latter. These spaces hold a certain kind of tension – they are the in-between: reminders of moments, of activity no longer there, and places of movement, places we use to get to and from. 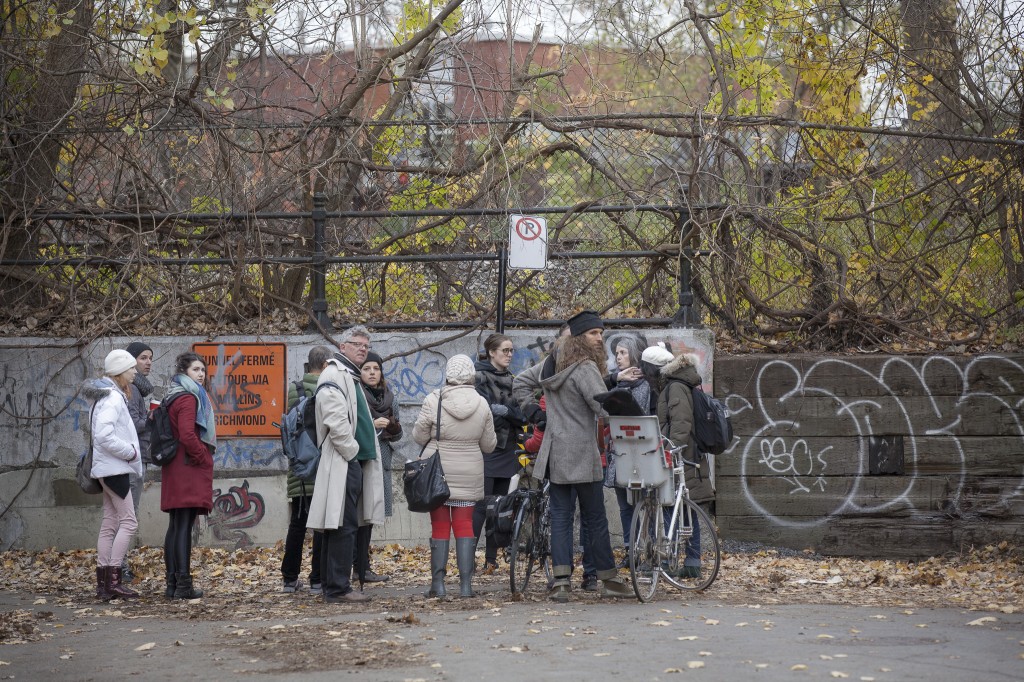 For the purpose of this intervention, I selected the pedestrian underpass walkway on Wellington, north of Rue Congregation. I chose this site because of its history, underneath the railway, and the importance of Wellington to the Pointe, while also being, for me, a not-so-nice place to walk through. The tunnel is cold, and dark, the cars zoom by quickly, and there isn’t a direct, safe way to cross the street to get to Parc Congregation. It is, to me, a place that I would not want to pass through during the nighttime.

Previously, I have engaged in another site-specific intervention in a similar place – a fire escape stairwell, in Concordia University’s Engineering and Visual Arts Building. In that intervention, I conducted a women’s space audit, discussing the site as a potential for safety/danger in the building. Violence against women and women’s safety/danger in space is an issue that continues to guide my research in the built environment. One guiding principle of this project is a quote by Fran Tonkiss: “[…] issues of gender and sexuality affect the perception and the use of urban spaces.”

Through my research on Pointe-St-Charles, I have found stories of women and girls who have gone missing in the area, notably Jolene Riendeau, Sharon Prior, and Tammy Leaky. In my intervention, I wanted to touch on the Wellington underpass as a space to discuss these missing women and girls, and violence against women in public spaces. Sharon Prior, for example, went missing at the age of 16 near her home on Rue Congregation. Through these stories of missing women, and also thinking about the current activism around Missing and Murdered Indigenous Women of Canada, I have noticed that there is often community action against these violences – as seen with the Jolene Riendeau case, which received help from St. Columba House, whose volunteers postered for the missing girl, and where a vigil was hosted 10 years after her disappearance.

The articles that we read in class, “The Early Years” and “Women Finding a Voice,” by the CourtePointe Collective first introduced me to the activism of women in Pointe St Charles, which was in line with women’s activism happening across Canada and Quebec, taking full swing in the 1960s and onwards. In the anthology Minds of Our Own, the author from the article “Changing Times” begins with a quote from Adamson, Briskin, and McPhail: “In 1965 in Canada, there were few women’s organizations, no women’s bookstores (because there were almost no books about women) and no women’s studies courses in schools and universities.” This quote illustrates the changes which have since occurred in society (though there are many more strides to make).

Finally, through my research, I became interested in the organization, Madame Prend Conge (MPC). MPC’s mission is to break women’s isolation, fight against poverty and violence, improve women’s living conditions, and to promote equality in society. The organization, founded in 1979, offers services ranging from a daycare, computers, a relaxation room, refreshments and a documentation center. They organize weekly activities such as fitness and art classes, and discussion groups on topics such as gendered violence, sexuality, housing, stress, and advocacy, and collective actions such as the March Against Women’s Poverty.

The class met near the Wellington underpass, by Rue Congregation. There, I started with reading Si Transken’s words, selected from her personal essay, “Reclaiming Body Territory,” on the topic of gendered violence and abuse. Afterwards, I explained the contexts which I have written above. Afterwards, I discussed notions of safety and danger, such as the cases of women and girls who had gone missing in the area. We discussed women’s bodies in space, and women’s activism – the mobilization around Parc Congregation.

Then, I invited the class to walk through the underpass tunnel one by one. Upon entering the underpass, I gave each class member a white ribbon, which is a symbol against women’s sexual abuse and violence. We met on the other wise of the tunnel, where I said this:

“The tunnel you just walked through is also a perfect metaphor for what is happening here today. We are going through something difficult, which is hard to talk about and makes people uneasy to think about, but there is a light at the end of the tunnel – as we have just experienced, by walking through the other side.”

From there, we walked onto Rue de la Sucrerie, and down Mullins. We stopped for a few moments at the bottom of Shearer, where there was once an underpass walkway. We discussed how women in the Pointe fought to close the underpass, as it had become a site of danger.

Special thanks to Micheline Cromp, the women of Madame Prend Congé, and David Ward.